Schedule of Astronauts to Appear at Cocoa Beach Parade

The City of Cocoa Beach will play host to an "Astronaut Corvette Parade" on Saturday, May 7th at 9:34am to commemorate the 50th Anniversary of the first American in space and at the exact time when Alan B. Shepard "blasted off" into space aboard  his Freedom 7 capsule.   The parade has been scheduled to take advantage of the many astronauts expected to be at the Kennedy Space Center this weekend to participate in Astronaut Hall of Fame Induction activities.

The parade event will likely go down in the Guinness Book of World Records as the largest astronaut parade in history!  The parade will start at the "glass bank" parking lot (intersection of 4th Steet North and Orlando Avenue) and proceed south along Orlando Avenue (A1A) to 1st Street South and returning north to the start point along Brevard Avenue.

The parade will be followed at 11:00am (opening ceremonies) of the Cocoa Beach 86th Anniversary Celebration/Party adjacent to the Cocoa Beach City Hall on Minutemen Causeway and Brevard Avenue.  Fun for the enitre family includes food, beberages, kid's games and live band entertainment. 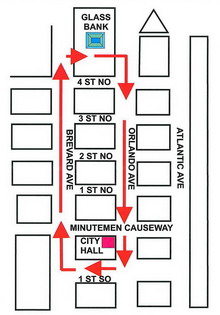