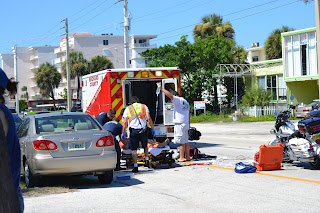 On July 31, 2011 at approximately 3:40pm, Daniel Byron Jr, 22, of Kissimmee was struck by a 2001 white Ford F250 at the intersection of N. Atlantic Ave (SRA1A) and 1st Street North. Byron was transported to Cape Canaveral Hospital via ambulance, where he died a short time later.

The driver of the truck, Justin Burson, 30, of Kissimmee (pictured below) was subsequently charged with DUI Manslaughter, DUI with property damage, leaving the scene of a crash resulting in death, and leaving the scene of a crash with property damage. The investigation is ongoing. Anyone with information pertinent to this investigation is urged to contact Officer Ric Colon at 321-868-3251.

Burson is being held at the Brevard County Correctional Facility with a bond of $41,500.