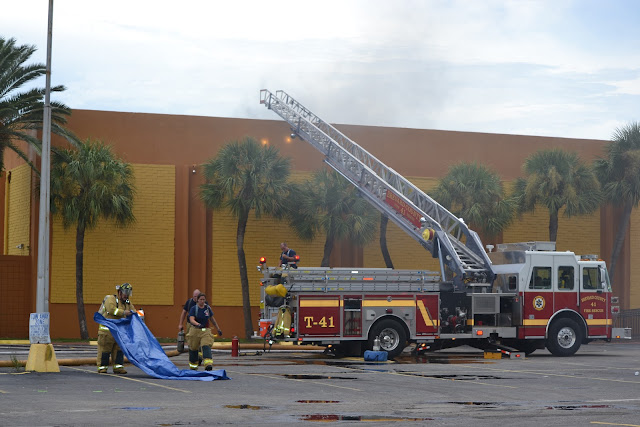 Fire crews from six fire agencies worked to extinguish the 3-alarm commercial fire.  Brevard County Fire Rescue (BCFR) dispatchers received a 911 call at 2:04 p.m. from workers at the Nameless Sports Bar & Grill, located inside the bowling alley, who reported a grease fire in a fryer located in the kitchen area.  The building is located at 600 North Courtenay Parkway.

According to Shore Lanes staff, at least 25 people safely evacuated the building when the fire was discovered.  Among those evacuated were 19 bowlers.  No injuries were reported.

BCFR crews arrived just three minutes after the alarm and found smoke pouring from the roof of the 40,000 square-foot structure.  Firefighters immediately struck a second alarm and positioned their ladder truck in front of the building.  Crews quickly stretched hand lines to the interior of the building and were met by dark smoke, high heat, and flames rolling across the ceiling.  The main body of the fire was located near the fryers and was knocked down using a combination of water from fire hoses and fire extinguishers.

Further investigation revealed that the fire had extended vertically into the cooking area's ventilation system and had begun consuming portions of a second floor storage area.  Firefighters continued to work to expose the fire from the ground floor as additional manpower was placed on the roof to ventilate the structure of heat, smoke, and hazardous gases.  A third alarm was called thirty (30) minutes into the fire to provide additional manpower at the scene.  Officials reported the fire out at 3:58 p.m.

North Courtenay Parkway was closed between Richland Avenue and Needle Boulevard for nearly an hour to accommodate the arrival of fire apparatus to the scene.

Fire investigators from BCFR and the State Fire Marshal's Office were on scene to complete the investigation and interview witnesses.  No damage estimate has been provided.  The kitchen area of the Nameless Sports Bar & Grill received extensive fire, smoke, and water damage and is not expected to reopen without renovation.  The dining area of the Bar & Grill received significant smoke and water damage and will remain closed.  Crews were working to ventilate the bowling alley of moderate smoke conditions.  Staff members expect the bowling alley to be closed through at least tomorrow but an official reopening date has not been determined.