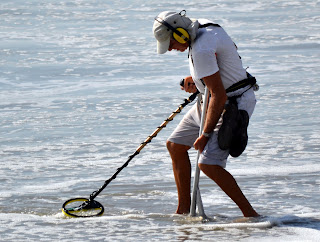 The unnamed storm which pounded Brevard County beaches over the weekend provided the ideal northeastern winds to churn up sunken Spanish treasure which can be found anywhere from Cape Canaveral south to Sebastian Inlet.

The most commonly found piece of Spanish treasure along Brevard County is the silver Spanish real.

But don't expect it to glimmer from the Florida sun half buried in sand.

Instead, the weather-beaten coin will most likely be completely black and just a thin wafer of its former self.

Expect to see beachcombers with metal-detecting gear all along Brevard County beaches at the break of dawn.