Will Florida's Space Coast Fly Gingrich To The Moon? 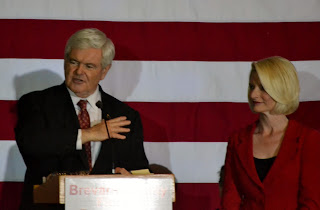 CAPE CANAVERAL, Fla. -- Former House Speaker Newt Gingrich grabbed national headlines when he visited the Space Coast last week and called for a permanent American base on the moon with five to eight launches a day from Kennedy Space Center.

But will such grandiose campaign promises actually deliver votes to Gingrich from Florida's Space Coast?

Brevard County is Florida's tenth most populous county and part of the vital Central Florida swing counties for both Primary and General Presidential elections.  But Gingrich faces some obstacles on Florida's Space Coast.

The Mitt Romney and Ron Paul 2012 campaigns were the only ones to reach out to Florida Republicans just ahead of early voting and absentee ballots while Newt Gingrich and Rick Santorum were still focused on South Carolina.  So many Brevard County voters may have already made up their mind prior to Gingrich's visit to the Space Coast.

Tea Party Republicans who support a space program still seem divided.  While Gingrich gained the endorsement of the leaders of an organization named 'TEA Party in Space,' a viewer poll on its website asked, "Whose space policy do you support?"  In that poll, 58% of the 5363 votes were cast for Paul, 27% Gingrich, 9% Obama, 5% Romney, and 1% Santorum (though the group's leader alleges on its Facebook page that only four IP addresses voted for Paul in the poll.)

Nice Florida weather should help Romney over the other GOP candidates because more liberal-leaning voters tend vote less when there is inclement weather on Election Day while conservative-leaning voters tend to still cast their ballots despite bad weather.

Although polls close at 7:00 p.m. in Brevard County, election results will not be released until after 8:00 p.m. E.S.T. because counties in Florida's panhandle are in a different time zone.  Follow Brevard Times on Facebook or Twitter tonight for up to the minute election results from Florida's Space Coast and Statewide.