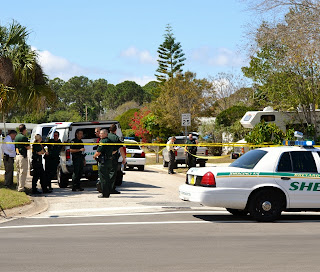 MERRITT ISLAND, Florida -- Brevard County Sheriff's deputies responded to a call this morning at 10:35 a.m. regarding a man allegedly armed with a 9 mm pistol threatening to commit suicide at a house located on 1490 Belford Court in Merritt Island.

At some point just after the deputies arrived, shots were fired in the backyard of the house.  Deputies confronted the man in the backyard and shot at the man.  The man suffered multiple gunshot wounds to the chest and was airlifted to Holmes Regional Medical Center for treatment.


UPDATE: The gunshot wound were fatal.  The man who was killed has been identified as 57-year-old Stuart Gilder.