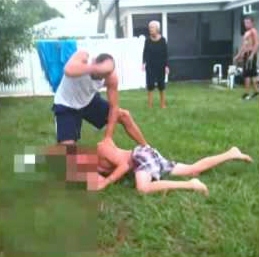 PALM BAY, Florida -  The criminal case that stemmed from last year's video taped beating of a teen in Palm Bay where 35-year-old Gary Leroy Johnson, Jr., a father of one of the teenagers, was seen intervening in a fight between two teenagers came to a conclusion yesterday evening when a jury found Johnson guilty of 6 of 7 criminal counts at the Moore Justice Center in Viera, Florida.

Johnson stood and faced Brevard County Circuit Court Judge Morgan Laur Reinman while the jury rendered its verdict, then he collapsed backwards into the arms of court bailiffs.  Brevard County Fire Rescue Crews were called to the scene and transported Johnson to the hospital.
Johnson allegedly arranged the fight between the two teens last August at his house on Dallam Avenue in Palm Bay.  After acquiring a video of the fight where Johnson is seen punching one of the teens, Palm Bay Police arrested Johnson.  Johnson faced two third-degree felony counts of child abuse, one first-degree felony count of aggravated child abuse, a second-degree felony count of aggravated battery, and three additional misdemeanor charges.  The one count that the jury found Johnson not guilty was the misdemeanor charge of contributing to the delinquency of a minor.

Johnson, through his attorney, had filed a motion to dismiss based on Florida's 2005 'Stand Your Ground' law which allows a Florida resident to meet force with force if that person feels it necessary to protect himself rather than first attempting to retreat from the scene.

Judge Reinman has scheduled a status hearing for Monday March 5 where Johnson is required to appear if he is not still hospitalized.