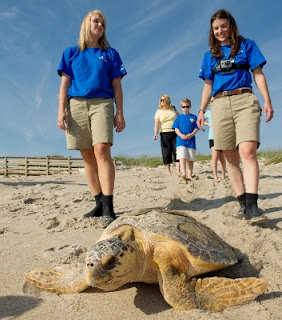 TITUSVILLE, Florida -- Earlier this morning, SeaWorld Orlando released a rehabilitated, sub-adult loggerhead sea turtle back into the waters of the Canaveral National Seashore near Titusville, Florida.

The sea turtle was found on the beach in Indialantic, Florida, and was brought to SeaWorld Orlando on Dec. 21, 2011, highly emaciated, lethargic and covered in leeches and barnacles.  The sea turtle was also suffering from digestive issues, possible pneumonia and small shell wounds.


Upon arrival at SeaWorld, the sea turtle immediately received antibiotics and was closely monitored by the SeaWorld Aquarium Team.

This year, SeaWorld Orlando has rescued 11 sea turtles, and released five.  For 45 years, SeaWorld Parks & Entertainment has helped animals in need -- ill, injured and orphaned.   More than 20,000 animals have been rescued by our experts.‪  SeaWorld’s animal rescue team is on call 24 hours a day, 7 days a week. ‪

To help protect this threatened species, make sure fishing line and all trash is disposed of properly. When fishing, use new "circle" hooks - sea turtles are less likely to swallow the circle-shaped hooks than traditional J-shaped, which cause suffocation or internal bleeding when swallowed.  Also, if a sea turtle’s nest is seen, please contact authorities.