Teacher Charged With Having Sex With Her Student 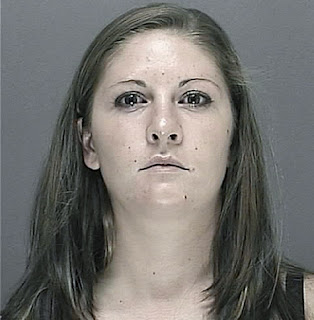 ORANGE CITY, FLORIDA -- Volusia County Sheriff’s investigators arrested a former English teacher Wednesday afternoon on charges that she had sex with a 16-year-old student. 25-year-old Stephanie Cobb, who resigned her position last year at University High School, was arrested at about 3:20 p.m. on a warrant charging her with unlawful sexual activity with a minor. The charge is a 2nd degree felony.

The investigation was launched on Dec. 13, after an unidentified woman called 911 to report that a friend was sending her suicidal text messages. The caller gave the boy’s name, address and phone number, but she declined to identify herself to the dispatcher and asked to remain anonymous.

Sheriff’s investigators eventually discovered that the call came from Cobb’s cell phone. Deputies tracked down the teen at University High School in Orange City, where he insisted he was fine and denied feeling suicidal. The family, though, disclosed that the boy was involved with an adult at the campus and was “in over his head.” While they didn’t have any proof, school officials acknowledged that there had been rumors that the boy was involved with a teacher.

For instance, the boy was alone with the 26-year-old Cobb at the school one day while classes were out for the Thanksgiving break. Confronted about the incident, school officials said Cobb was a bit inconsistent in her explanation. When asked by school officials if the two had hugged or kissed, Cobb reportedly paused for an extended period before responding: “I don’t recall.” Then, while checking the boy’s phone on the day of the 911 call to see if he had sent any suicidal text messages, Cobb’s number was found in his contacts -- listed under My Precious Angel. Cobb resigned her position the next day.

During an interview with investigators, the teen acknowledged engaging in a consensual relationship with Cobb that led to sex on one occasion while in Cobb’s car at a park in Deltona. He said that the two initially started talking about his college plans, but then the relationship grew from there and he said they were in love and had spent a great deal of time together.

A couple of the boy’s friends also confirmed that he had confided in them about the relationship. Investigators searched Cobb’s car along with phone, computer, text and e-mail records. What they found was that Cobb and the boy had exchanged more than 12,000 text messages and talked on the phone more than 500 times during a four-month period beginning in the middle of August. Cobb declined to be interviewed by investigators.

On Wednesday, the Sheriff’s Office’s case agent, Investigator Stella Ott, obtained an arrest warrant issued by Circuit Court Judge Hubert L. Grimes. Investigators who had Cobb under surveillance pulled her over at about 3:20 p.m. as she drove away from her home on Alexandra Woods Drive in DeBary.

Cobb was transported to the Volusia County Branch Jail in Daytona Beach, where she was booked in shortly after 5 p.m. Her bond has been set at $25,000.

NJ Teacher Accused Of Sex With Student Arrested In FL