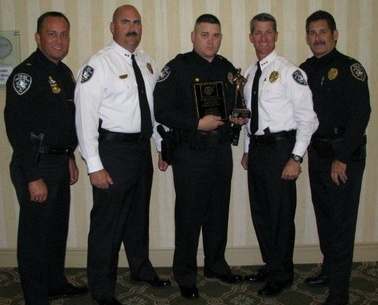 COCOA BEACH, Florida -- Detective Thomas Cooper (centered above) has been recognized as the Cocoa Beach Police Department’s Officer of the Year for 2011.  At the recent Brevard County Chief’s Association Officer of the Year Banquet held at the Melbourne Hilton Rialto, Chief Bryan Holmes presented Detective Cooper with the award highlighting Tom’s devotion to duty and willingness to serve in any capacity.

Detective Cooper is currently assigned to the Criminal Investigation Division and also serves as the Department’s AED/CPR and Blood Borne Pathogens Instructor.  In the past, he has served as Field Training Officer and Traffic Homicide Investigator.

In addition to his other responsibilities, Cooper was the lead investigator on three significant cases this past year; one involving a difficult sex abuse case, one was the armed robbery of the Quiznos restaurant and the third was the shooting and attempted murder of a 66 year-old resident.  All three cases resulted in arrest.


Aside from the responsibilities of his position, the Cocoa Beach Police Department says that Cooper has persevered through the difficulties and emotional trauma of caring for a critically ill child.  His daughter Eryn, who at the age of five suffered kidney failure and required years of dialysis and treatment and eventually received a transplant.  Throughout this trial, CBPD says that Cooper continued to work without complaint, offering help to others and never asked for assistance.  CBPD says that Cooper demonstrates a can-do spirit, high morale, and is committed to the mission of the Department.