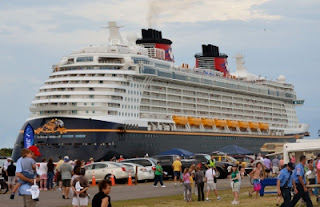 Just an hour before the ship departed, a line of afternoon thunderstorms passed over Jetty Park.  The rain and wind thinned the crowd of well-wishers to about half of those who had initially gathered at Jetty Park on Saturday.

Prizes were given away along with entertainment provided by Radio Disney and Lite Rock 99.3 FM.

Attendees to the event were encouraged to bring a non-perishable food item for the Brevard Sharing Center.

The Disney Fantasy will sail seven-night cruises to the Caribbean and Disney’s private island, Castaway Cay.
The 4,000-passenger Disney Fantasy is the sister ship of the Disney Dream, has 1,250 state rooms, 14 decks, over 1,400 crew members, and a 22-knot cruising speed.