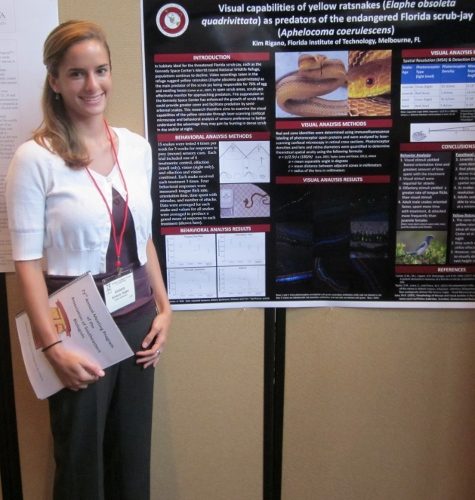 MELBOURNE, Florida — Kim Rigano, a Florida Institute of Technology student and junior majoring in biological sciences, has won three important research awards and two competitive grants in the last few months.  The latest is the John C. Johnson Award for Excellence in Student Research, first place from the Beta Beta Beta (Tri Beta), which she received at the national biological honor society’s annual convention in San Juan, P.R.  Her research work is on the visual system of the yellow ratsnake, which it uses to prey upon the threatened Florida scrub-jay.

They determined that yellow ratsnakes can see in both day and night, but their nocturnal vision is relatively poor. Based upon the distribution of light- sensing photoreceptor cells in the retina, they were able to calculate “theoretical visual acuity” and the minimum distances at which snakes can visually detect scrub-jays in the day and in the night.

In April, Rigano also won first place for her research presentation at the southeast regional convention of Tri Beta, held in Athens, Ga. Also that month, she won the Northrop Grumman Science Champion award, the best-in-show award for the College of Science at Florida Tech’s 2012 Northrop Grumman Student Design Showcase.

“Yellow ratsnakes are native to Florida and they are important predators of the Florida scrub-jay, but the work these students have done has even broader implications,” said Grace. “Their research forms a foundation for understanding the impacts of invasive exotic snakes such as the Burmese python. Snakes are amazingly efficient predators, and can do tremendous ecological damage.”

He credits the two researchers with taking a very broad approach, using field biology, behavior in the lab, and biochemistry. “They have generated exciting results on an important Florida ecological issue, so it’s no surprise that they have been so successful. Kim is a very talented young scientist.”

A resident of York, Maine, Rigano is a 2009 graduate of York High School in York, Maine.