Indialantic Man Dies In I-95 Crash 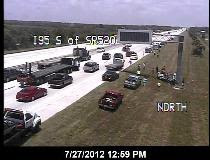 COCOA, Florida -- The Florida Highway Patrol is reporting that a 65-year-old man from Indialantic, Florida, died in a crash on I-95 just south of State Road 520.  His identity has not been released pending next-of-kin notification.

FHP says that the man was driving a 2001 Subaru Legacy northbound in the outside lane of I-95.  Witnesses told FHP troopers that the Subaru suddenly drove off the highway and onto the east shoulder.

The Subaru then continued northbound on the shoulder until it collided head-on with a large metal information sign pole.