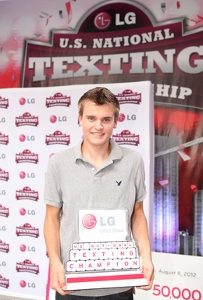 “Texting is one of the most popular forms of communication and yet it continually surprises us just how fast these kids can draft and send out a message,” said James Fishler, senior vice president of marketing and go-to-market operations, LG Electronics USA. “But because texting is such a fast, convenient form of communication, it’s easy for people to use it to bully and spread negativity. We are proud to use the 2012 LG U.S. National Texting Championship as a platform to challenge all of us to take responsibility for stopping bullying in our communities.”

The quest to find the nation’s fastest texter began in 2007 and has continued to bring the brightest and quickest thumbs to the LG stage in New York each year. With every new championship, mobile technology leader LG returns to New York with new challenges, prizes and eye-catching text-themed events. This year’s winner demonstrated his superior speed and dexterity, besting 10 other finalists from across the country.

Facing off in Times Square in the heart of Manhattan, 11 of the nation’s fastest texters put their texting speed and accuracy to the test using the official LG U.S. National Texting Championship device, the Straight Talk® LG Optimus Zip™. The Optimus Zip features a slide-out QWERTY keyboard for faster, easier texting. The contestants were required to text phrases exactly as they appeared on a screen, identify texting acronyms, text backwards and type while blindfolded.

The 2012 LG National Texting Championship concluded with the “Text Attack” challenge, which required the finalists to type a series of phrases as quickly and accurately as possible. Taking on 16-year-old Kent Augustine from Queens, New York, Wierschke knew he would not only have to be fast, but also hit the keys in perfect order to be victorious.

“Hearing my name called for the second time was amazing and a total shock,” said winner Wiershcke. “I feel really lucky that I was able to come back this year to compete again.”