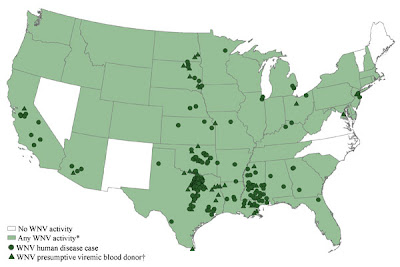 The Centers for Disease Control and Prevention is urging people to take steps to prevent West Nile virus infections.  Outbreaks of West Nile virus disease occur each summer in the United States.  This year, some areas of the country are experiencing earlier and greater activity.

Approximately 1 in 5 people who are infected with West Nile virus will develop symptoms such as fever, headache, body aches, joint pains, vomiting, diarrhea, or rash.  Less than 1 percent will develop a serious neurologic illness such as encephalitis or meningitis (inflammation of the brain or surrounding tissues).  About 10 percent of people who develop neurologic infection due to West Nile virus will die.  People over 50 years of age and those with certain medical conditions, such as cancer, diabetes, hypertension, kidney disease, and organ transplants, are at greater risk for serious illness.
There are no medications to treat, or vaccines to prevent, West Nile virus infection.  People with milder illnesses typically recover on their own, although symptoms may last for several weeks.  In more severe cases, patients often need to be hospitalized to receive supportive treatment, such as intravenous fluids, pain medication, and nursing care.  Anyone who has symptoms that cause concern should contact a health care provider.