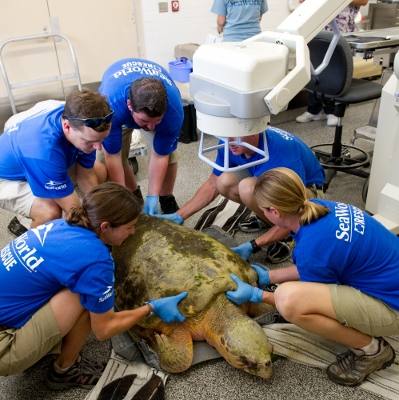 ORLANDO, Florida - A sub-adult loggerhead sea turtle that was rescued yesterday by Melbourne Police and Brevard Sheriff’s Deputies is now being cared for at SeaWorld in Orlando, Florida.

Around 9:00 a.m. yesterday, the Brevard County Sheriff’s Aviation Unit responded to a call of a possible swimmer in distress in the Indian River Lagoon.

Upon arrival, Sheriff’s helicopter personnel determined it was not a swimmer that needed help, but it was a large sea turtle.  The Melbourne Police Marine Unit was then called upon to help aid the turtle.


Once on shore, Sea Turtle Preservation Society personnel took custody of the loggerhead sea turtle. Officers were informed that the turtle would be brought to Sea World for emergency care and rehabilitation.


SeaWorld Orlando’s turtle experts and vets have been conducting health assessments on the turtle to determine the cause of its behavior, which includes having trouble diving and seeming to be disoriented. The tests have included blood samples, x-rays and behavioral evaluations. At this time no physical health problems have been discovered and the team will continue to care for the 168-pound turtle until its health improves.

SeaWorld's animal rescue team is on call 24/7 to save and care for injured, orphaned or ill animals. So far in 2012, SeaWorld Orlando has rehabilitated 27 turtles.