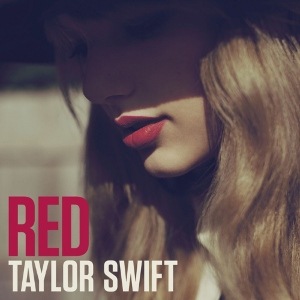 Taylor Swift's highly-anticipated fourth studio album will be released worldwide on October 22, 2012, Taylor herself announced last night during a live YouTube web chat with her fans.

Entitled Red, the album will be released on Big Machine Records and contains 16 tracks. After writing her last album (Speak Now) entirely by herself, for this record Taylor collaborated with several artists, producers, and songwriters she had always wanted to work with.

"For the last two years, I've been working on an album called Red," Taylor says. "I called it Red because of the tumultuous, crazy adventures in love and loss that it chronicles. In my mind, when you experience love that's fast paced and out of control and mixes infatuation, jealousy, frustration, miscommunication, and all of those lovely emotions...in retrospect, it all looks red."

The first single from Red, "We Are Never Ever Getting Back Together" (written by Taylor Swift, Max Martin, Shellback), has already arrived at radio and will be available today at iTunes and Google Play, and beginning tomorrow worldwide at all digital retail outlets.
Album pre-sale dates will be announced in the coming weeks.

22 year-old Taylor Swift is a six-time GRAMMY winner, and is the youngest winner in history of the music industry's highest honor, the Grammy Award for Album of the Year (for Fearless, released in 2008). Her 2010 album, Speak Now, was lauded on Rolling Stone's prestigious The 50 Greatest Albums of All Time (by women) list, and Time magazine has named Taylor one of the 100 most influential people in the world.

Earlier this summer, Rolling Stone called Taylor "one of the few genuine rock stars we've got these days, with a flawless ear for what makes a song click." She is Billboard's Woman of the Year, as well as the reigning American Music Awards Artist of the Year, and both the Country Music Association and the Academy of Country Music's current Entertainer of the Year. She is also the most awarded star in the history of the Teen Choice Awards, taking home honors for both music and movies.

Taylor, who writes all of her own songs, has career record sales in excess of 22 million albums and 50 million song downloads. Each of her three studio albums has sold in excess of 5 million copies worldwide, and her most recent album, Speak Now, is one of only 17 albums in the entire history of music to sell more than 1 million copies in a single week. She has had singles top both the country and pop radio charts around the globe, is one of the top 5-selling digital music artists worldwide, and is the top-selling digital artist in country music history.

Taylor holds the Billboard records for the Most Top 10 Debuts in the History of the Hot 100 Chart, the Most Charting Songs from One Album in a Single Week, and the Longest Charting Album on the Top 200 Chart.  Speak Now is listed in the Guinness Book of World Records as the Fastest Selling Digital Album by a Female Artist.

Earlier this year, Taylor wrapped her world tour in support of SPEAK NOW, and played 111 shows to more than 1.5 million fans in sold-out stadiums and arenas in 19 countries spanning four continents in 2011 and 2012. Her 107-date FEARLESS 2009/2010 Tour sold out arenas and stadiums in 88 cities in five countries.

Taylor voiced the character of Audrey in the 2012 hit movie "Dr. Seuss's The LORAX," and also this year, she contributed two songs to the soundtrack of the movie "The Hunger Games." She has hosted Saturday Night Live, appeared in the Garry Marshall film "Valentine's Day," and guest-starred on the Emmy-winning TV drama CSI.