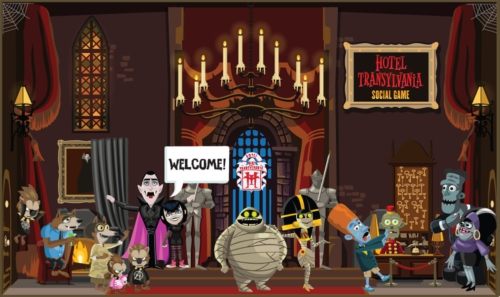 In the Hotel Transylvania Social Game, players are tasked with building, decorating, managing and maintaining their own Hotel Transylvania, where a host of fun monsters, inspired by the upcoming animated film Hotel Transylvania, come to get away from the stresses of the human-inhabited world.  Grow zombies in your hotel graveyard to create hotel staff, and keep guests happy with a host of torturous amenities.  Players can check back daily to collect rewards, share gifts with friends and entertain their hotel guests.

The Hotel Transylvania Social Game was designed and developed entirely in-house by Sony Pictures Interactive.  "Our goal was to build a game that is fun to play while taking advantage of the full range of social tie-ins that experienced gamers expect from social games," said Scott Nourse, senior vice president of production, Sony Pictures Interactive.  "We are proud of our achievement in that regard and are excited about the framework we have built which will enable us to build more games in the future."

The Hotel Transylvania Social Game is free to play and available to anyone with a Facebook account at http://facebook.com/hoteltgame.  Players who wish to augment gameplay through purchase of in-game currency will have the ability to enhance and personalize their individual experience.

Sony Pictures Interactive is planning on launching one to two new social games a year.  The next game is currently set for launch in April 2013.

About Hotel Transylvania
Welcome to the Hotel Transylvania, Dracula's lavish five-stake resort, where monsters and their families can live it up, free to be the monsters they are without humans to bother them. On one special weekend, Dracula has invited some of the world's most famous monsters — Frankenstein and his wife, the Mummy, the Invisible Man, a family of werewolves, and more — to celebrate his daughter Mavis' 118th birthday. For Drac, catering to all of these legendary monsters is no problem — but his world could come crashing down when a human stumbles on the hotel for the first time and takes a shine to Mavis.