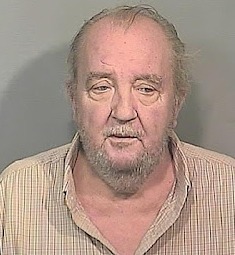 Police say that Robinette approached a 16-year-old girl at the Winn-Dixie supermarket, located at 100 Canaveral Plaza in Cocoa Beach, Florida, on September 16, 2012 and offered the girl money for sex.  When the girl turned down Robinette's offer, Robinette then asked for other sexual favors from the girl.

Robinette then allegedly attempted to prevent the girl from leaving, but she was able to contact police.

Robinette was booked and transported to the Brevard County Jail with a $8,000 bond.


Anyone with information regarding this incident is urged to contact the Cocoa Beach Police Department  (321) 868-3251 or Crimeline  1-800-423-TIPS.
Labels: Cocoa Beach crime