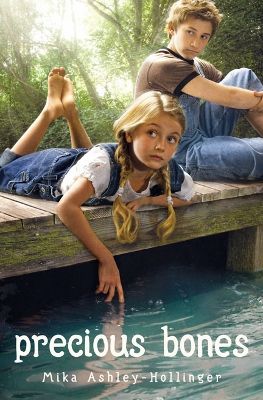 MICCO, Florida -- Bones' house in the Florida Swamps may lack electricity, but there's no shortage of heat in the story she tells in Precious Bones, a new novel for kids by Brevard County, Florida native Mika Ashley-Hollinger.  When two men are found murdered within a few weeks in Bones' small town, the suspense builds, myth and mystery begin to intermingle, and sparks start to fly.

This historical fiction novel, set in 1949, depicts a rural Florida that has all but vanished, where neighbors sometimes help one another and at other times harbor deep fears and resentments. Ten-year-old Bones lives by the swamp with her mother, Lori, and her father, Nolay, who is part Miccosukee Indian. When Nolay is accused of murder, Bones wants to believe he's innocent. But Nolay has a habit of telling tall tales. Or are they really lies? With the help of her friend, Little Man, Bones begins to investigate. The swamp holds clues to the mystery, but also voracious mosquitos, poisonous snakes, wild panthers, brown bears with gigantic claws, and, just maybe, "Swamp Sally," a witch. Will Bones find the evidence she needs to prove her father innocent?

"Readers who step into Bones' swamp will find it very hard to leave," writes BookPage, while Horn Book calls Precious Bones "a rich stew, including hearty dollops of mystery and suspense," and Booklist praises it as "an intriguing debut, written lovingly to a way of life now lost."

Mika Ashley-Hollinger, mikaashleyhollinger.com, was born and raised in Micco, Florida on the Space Coast of Florida.  Precious Bones  is her debut novel; she wrote it in tribute to a way of life that has all but disappeared. Mika lives with her husband and an assortment of endangered birds and wild chickens on a protected wetland in Hawai'i.