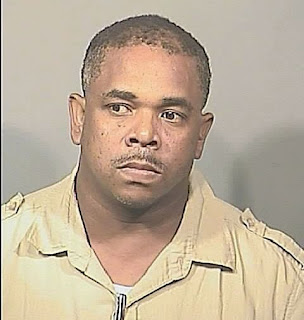 
VIERA, Florida -- The Brevard County Sheriff’s Office is asking for the community’s assistance in locating a wanted violent fugitive.

43-year-old Terrence Lakeman is wanted on outstanding warrants for the charge of aggravated stalking.  Lakeman also is suspected in the violent beating of his former girlfriend that occurred at the McDonald’s Restaurant located at 5370 Stadium Parkway, in Viera, Florida earlier today.

Lakeman, a Jamaican National, has a long history of violence and is described as being 5’11” tall, weighing 250 pounds, and was last seen leaving the scene in a gold colored, crossover-type vehicle, similar to a Pontiac Aztec.

Today’s incident took place in the bathroom of the McDonald’s, at approximately 9:45 a.m., after a scheduled court hearing was cancelled.  Lakeman allegedly followed the victim to the restaurant and watched her from the parking lot.

Upon observing the victim entering the restroom, the suspect entered the restaurant and immediately walked in to the restroom.

Once alone with the victim, she was violently beaten and left critically injured on the restroom floor. The suspect then exited the restaurant and was observed by witnesses leaving the scene in the above described vehicle.  The victim was transported by a life flight helicopter to a Trauma Center where she has been upgraded to stable condition.  The investigation into this incident is still ongoing.

Anyone with information concerning the whereabouts of Terrence Lakeman is asked to call either the Brevard County Sheriff’s Office, Domestic Violence Unit at 321-633-8413 or CRIMELINE at 1-800-423-TIPS (8477).