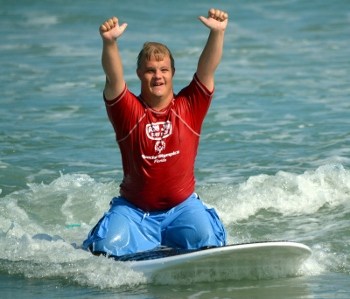 COCOA BEACH, Florida -- Florida’s only state surfing competition dedicated to the Special Olympics is being held today, September 15th at Alan Shepard Park in Cocoa Beach, Florida. The one day event is scheduled for 11:00 am - 5:00pm.


The Special Olympics-sanctioned surfing program, the first of its kind in the world, began in June of 2010 with a group of eight Special Olympics athletes in Cocoa Beach.  Since those humble beginnings, the program now encompasses the entire state and includes nearly 100 athletes.


Ron Jon Surf Shop's support allows for expanding current surfing, training and competitive opportunities for Special Olympics athletes.  The surfing program features one-on-one interaction between the Special Olympics athletes and the experienced team of professionals at the surf schools around the state and offers both water safety education and fun on the beach.