As with prior year's announcements, the public relation and media hype machines went to work.  Every mainstream news outlet featured the story yesterday.  However, the universal reaction from readers' comments across a wide range of media viewer demographics was a resounding "NO."

By over an 80% margin, mainstream media viewer comments were often kind in their denouncement, saying along the lines that Kunis was, "cute, but not sexy," while also questioning Esquire's judgement with comments such as, "Is this a joke?"

The reader reaction to Esquire's choice goes beyond Kunis.  It reveals that with the increased use of interactive media on the internet with a corresponding diminishing use of one-way media such as hard print, the relevance of the social elite media's opinions and pronouncements to a mass audience is also diminishing.

The same principle of interactive media applies to financial and political elites as well. Similar viewer disbelief is expressed when Federal Reserve Chairman Ben Bernanke's says that inflation remains under control while food and gas prices rise, or when the Obama Administration releases a 7.8% unemployment number.

In a world where Brevard County's Kate Upton can promote herself with a YouTube video where popular views may ultimately lead to a Sports Illustrated modeling career, the social elite media coronations such as Esquire's 'Sexiest Woman Alive" may soon become as salient as a video recommendation by a Blockbuster store clerk and a hard print newspaper's political endorsement.


The naming of Kunis as 'Sexiest Woman Alive" comes at the same time that the actress is being rumored as a possible star in the upcoming movie based on the book 50 Shades of Grey which was infamously briefly banned by the Brevard Countly Library system. 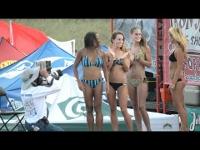