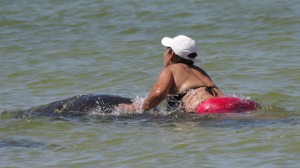 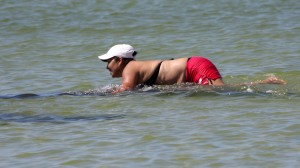 PINELLAS COUNTY, Florida -- The Pinellas County Sheriff’s Office - Environmental Lands and Marine Enforcement Unit is reporting that the woman who was observed touching and riding a manatee over the weekend at Fort DeSoto Park has turned herself into authorities.

Shortly after 4 p.m. Tuesday, 52-year-old Ana Gloria Garcia Gutierrez called the Pinellas County Sheriff’s Office Communications Center to turn herself in.  Deputies met with Gutierrez at her residence and questioned her regarding the reported events.

Deputies say that Gutierrez admitted to the offense claiming she is new to the area and did not realize it was against the law to touch or harass manatees.  Deputies further explained the law regarding manatees and the possible penalties for violating such laws.


Deputies concluded their contact with Gutierrez and explained to her that charges would be forwarded to the State Attorney’s Office for prosecution.

Due to the nature of the crime this was not an arrestable offense because it did not occur in the deputy’s presence.

On Sunday, September 30, 2012, at approximately 1:00 p.m., deputies responded to Fort DeSoto Park due to reports of a woman “riding” a manatee in the waterway just north of the Gulf Pier. 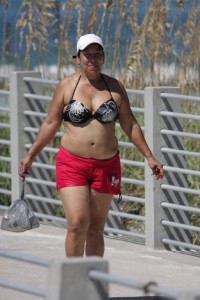 When deputies arrived on scene, the woman was unable to be located.  Witnesses in the area were able give deputies a description, including photos, of the woman and where she was last seen.

A violation of this statute is a 2nd degree misdemeanor.

No manatees are believed to have been injured.