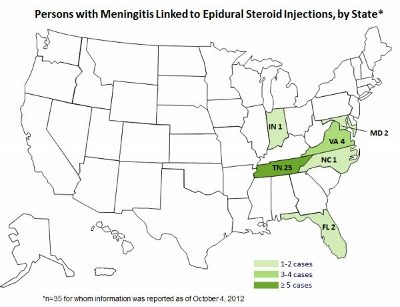 All patients who may have received these medications need to be tracked down immediately.  Patients can find the names of the clinics that used these medications on the CDC website,” said Benjamin Park, M.D., medical officer, Mycotic Diseases Branch, CDC.  “It is possible that if patients with infection are identified soon and put on appropriate antifungal therapy, lives may be saved.”
Infected patients have developed a variety of symptoms approximately 1 to 4 weeks following their injection, including fever, new or worsening headache, nausea, and new neurological deficit (consistent with deep brain stroke). Some of these patients’ symptoms were very mild in nature.  Cerebrospinal fluid obtained from these patients has shown findings consistent with meningitis.

Physicians should immediately contact patients who have had an injection (e.g., spinal, joint) using any of the three lots of methylprednisolone acetate listed above to determine if they are having any symptoms.  Although all cases detected to date occurred after injections with products from these three lots, out of an abundance of caution, CDC and the Food and Drug Administration (FDA) recommend that healthcare professionals cease use of any product produced by the New England Compounding Center until further information is available.