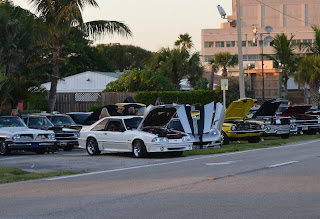 On Friday, participants gathered at the Rods n' Rockets 2012 car show at Kennedy Space Center in Merritt Island, Florida  from noon to 6 p.m.

On Saturday, October 13, 2012, the 2012 Rods n' Rockets car show moves to The Cove at Port Canaveral from 8 a.m. to 5 p.m.  The Port Canaveral event will have Muscle Cars, Hot Rods, and Street Trucks on display along with a Family Fun Zone.

After the Port Canaveral car show, a Saturday Night Drive In will be held at Ron Jon Surf Shop in Cocoa Beach, Florida from 7 p.m. to 10 p.m.