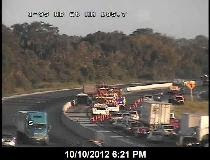 ROCKLEDGE, Florida -- The Florida Highway Patrol is reporting that the right and center southbound lanes on I-95 have re-opened following a fatal crash that occurred around 3:53 p.m. this afternoon near mile marker 195 just southeast of the Fiske Boulevard (State Road 519) exit.
FHP says that the dump truck was traveling southbound on I-95 in the right lane when it drifted to the left and crossed all lanes on southbound I-95.

The front of the dump truck struck the barrier wall head-on and then caught fire.  The driver, a 70-year-old man from Malabar, Florida, died at the scene.  Troopers will wait for an autopsy report to see if he suffered from a medical episode before loosing control of the dump truck.  The man's identity has not been released pending next-of-kin notification.


UPDATE: All lanes are re-opened.


Traffic was backed up in Brevard County from the accident scene northward on southbound I-95 to State Road 520 during rush hour as seen in the I-95 at State Road 520 traffic cam below.  Traffic has cleared up substantially since the opening of a second lane. 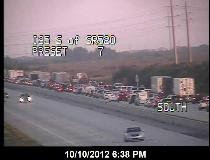