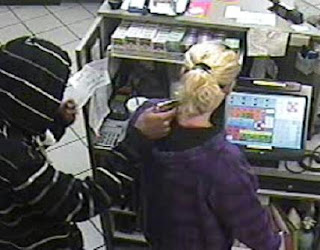 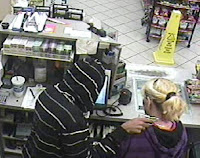 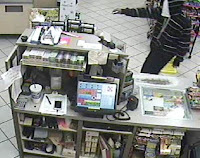 At approximately 1:30 a.m. this morning, a suspect entered the Circle K located at 1900 Emerson Drive in Palm Bay, Florida.  The suspect is a  black male wearing all black and a white mask.

Police say that when he entered the store, he pointed a silver handgun at a female store clerk.  The suspect put the gun to clerk's head and took money and cigarettes.  The clerk tried to escape in her vehicle but was pulled out by the suspect who then tried to drag her behind the store but fled.

A K-9 tracked to Alesio Street where the track abruptly ended.  It is believed the suspect fled in a vehicle from that location.  Police say the investigation is ongoing.

Anyone with information should contact the Central Florida Crimeline at 1-800-423-TIPS.  Callers can remain anonymous and can be eligible for cash rewards of up to $1,000 in this case.