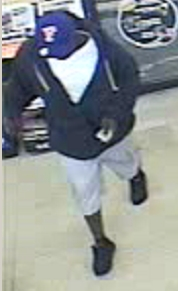 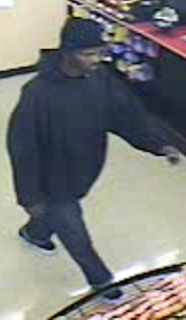 At approximately 3:15 a.m. Sunday two suspects entered the Circle K store located at 4950 Babcock Street NE.  One of the suspects went towards the rear of the store while the other suspect attempted to purchase a “Black and Mild” cigar.

When the clerk opened the register, the suspect pointed a small black handgun at her and demanded the cash from the register.  The gun is described as having wooden grips and what appears to be a homemade silencer.  The clerk complied and the two suspects fled the store on foot.

The suspects are described as two black males in their 30’s.  One of the suspects is described as being approximately 5’8” tall, weighing about 200 pounds.  He was wearing what appeared to be a blue “Florida Gators” ball cap.

The second suspect is described as being approximately 5’11” tall with a slimmer build.

In the surveillance video, police say it appears the suspects approached the store from Tree Ridge Circle (from the south) and fled towards Dawn Street (north).

Anyone with information is asked to contact the Central Florida CRIMELINE at 1-800-423-TIPS.  Callers can remain anonymous and can be eligible for cash rewards of up to $1,000 in this case.