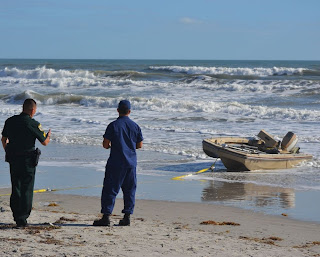 The single outboard-engine fishing boat had a life jacket still aboard.  Brevard County Sheriff's deputies responded to the scene while the Sheriff's STAR helicopter made several pass overs to determine if anyone was overboard in the nearby waters.

A U.S. Coast Guard rescue boat also responded to the scene and made several passes parallel to the Cape Canaveral and Cocoa Beach shoreline to search for survivors.

Nearby beach-goers bailed water out of the craft and pulled it ashore with the assistance of a BCSO ATV so it would not get swept back out to sea.