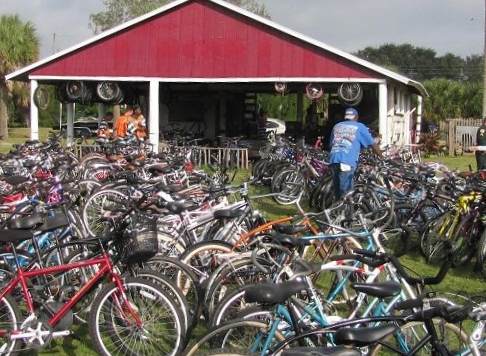 COCOA, Florida -- In 2006, the Brevard County Sheriff’s Office implemented a program using inmates to refurbish abandoned and unclaimed bicycles and give them to underprivileged children for Christmas, birthdays and other holidays throughout the year.  The program expanded to include homeless veterans who needed bikes as their primary source of transportation.

In 2012, more than a thousand bikes were donated to various Brevard County charities as a result of this program.  What made 2012 so special is that our friends from Wal-Mart in Titusville, Cocoa, Merritt Island and Melbourne generously donated more than 300 bicycles to the program to make it our best year ever.  Waste Management has also partnered with the Sheriff’s Office and saves discarded bicycles that would otherwise be taken to the county landfill and gives them to the Sheriff’s Office to be refurbished.

Since 2006, almost five thousand bicycles have been donated.

For citizens wishing to donate a bicycle to the program, they can drop off their bike at any of the Sheriff’s Office locations below:

For any additional information about the Sheriff’s Bike Program, please contact Major Darrell Hibbs at (321) 690-1502.