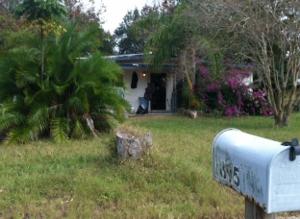 TITUSVILLE, Florida -- The Titusville Police Department received a report from an agent representing the new home owner at 1895 Smith Drive in Titusville at 8:49 a.m. today saying a man had been found deceased inside the house.


Police say that this is the same address where an eviction order had been served by the Brevard County Sheriff’s Office on Friday November 30th, 2012.  In that incident, Glenn Hurley had barricaded himself within the house and refused to come out.  The Titusville SWAT team was called to support the Sheriff’s Office.

The Judge who issued the eviction order was contacted for clarification and he issued a stay until court proceedings were held yesterday when the property turned over to the new owners.  Police say there are no known conflicts that occurred at the courthouse or when the Sheriff’s office went to the home to allow the new owners into the residence.  Sheriff's deputies removed visible weapons at that time.


The home owner/representative had been cleaning the home on December 5th, 2012 until 10 p.m. and left the house unsecured.  They returned this morning and found Hurley had gotten back into the house during the night and appeared deceased.


Due to comments and previous threats made by Hurley, and statements by the neighbors, the house had to be cleared by the Bomb Squad along with members of the Titusville SWAT Team before detectives could safely enter the house.


Hurley was found dead in bed by an apparent self-inflicted wound.  There are no signs of foul play.  Authorities were able to locate relatives out of state and have notified them of the death.


Large fireworks and weapons were recovered from the home today and the fireworks will be disposed of by the Brevard County Bomb Squad.  In addition, a cleaning crew member working last night at the house, removed more fireworks and discovered an improvised explosive device within a bag of large fireworks that the crew had taken home.  This small device was recovered today and will be safely detonated by the Bomb Squad.