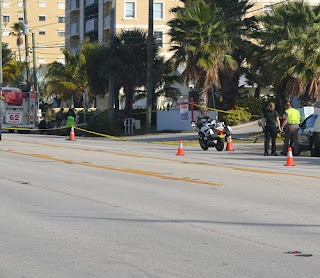 COCOA BEACH, Florida -- Florida Highway Patrol spokesperson Sgt. Kim Montes said in a press release that FHP has identified the vehicle and driver in a hit-and-run crash where 34-year-old Tedah C. Branch of Cocoa Beach, Florida was found lying on the side of northbound State Road A1A, near 33rd Street just south of the Cocoa Beach city limits at approximately 7:20 a.m.  on November 27, 2012.

Troopers say that a 26-year-old Amit C. Datt of Oviedo, Florida was driving a 2011 Dodge Caravan northbound on State Road A1A in the outside lane.  Meanwhile, Branch was allegedly walking or running across State Road A1A from west to east.

The FHP report says that Branch entered the Caravan's lane of travel and collided with the front right - to right side of the vehicle.  Branch was then ejected and landed on the east shoulder of State Road A1A.  Datt left the scene and was unidentified at the time.

FHP says that Datt said he had traveled the route where the traffic crash occurred at the approximate time of the crash.  Datt also allegedly said that he believed he struck a large animal, such as a deer and he continued on his travels.

The physical evidence gathered from the scene, the Caravan, and Branch will be analyzed by FHP as part of the traffic homicide investigation to assist in determining who is at fault in this traffic crash.

This crash remains under investigation and charges are pending against Datt.