Florida Breeding Wood Storks May Be Removed From Endangered List 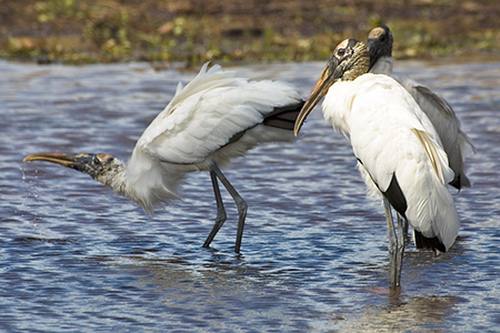 ORLANDO, Florida -- The U.S. Fish and Wildlife Service is proposing to upgrade the status of the U. S. breeding population of wood storks from Endangered to Threatened under the Endangered Species Act (ESA).  The proposal follows a comprehensive review, conducted by Service biologists, of the best available scientific and commercial information about the species’ status.


The wood stork is the only true species of stork nesting in the United States. Since its original ESA listing as endangered in 1984 the U.S. breeding population has shown substantial improvement in the numbers of nesting pairs as a whole and the expansion of its breeding range. The three-year averages during the past 10 years (2001 – 2010) range from 7,086 to 8,996 nesting pairs, all above the 6,000 nesting pair benchmark average established for reclassifying the species as Threatened, but well below the five-year average of 10,000 nesting pairs needed for delisting.


“Although some habitat loss continues, current population data clearly indicate that the wood stork is benefiting from the work of private landowners and several strong partnership efforts,” said Cindy Dohner, the Service’s Southeast Regional Director. “The wood stork is expanding its breeding range using a wide variety of wetlands to forage, roost, and breed, including man-made and restored wetlands.”


The proposed reclassification would not change any conservation or protection measures for the wood stork under the ESA. Rather it would recognize the stork’s ongoing recovery and the positive impact that collaborative conservation efforts over the last two decades have had on breeding populations. With a continuing trend, the species could become suitable for de-listing from the ESA. Therefore, addressing the threats associated with habitat loss, including the protection of natural wetlands through partnerships and the focused management of public lands, remains a conservation priority for the Service.

When the Service originally listed the Southeastern U.S. portion of the population, the wood stork’s range included Florida, Georgia, South Carolina, and Alabama and breeding was primarily in central and south Florida. Historically the Florida Everglades and the Big Cypress National Preserve once supported large breeding colonies. Today its range includes portions of North Carolina and Mississippi with significant nesting in Florida, Georgia, and South Carolina. Biologists believe man-made changes in the Everglades and Big Cypress ecosystems have contributed to the bird’s expanded breeding range.


The Natural Resources Conservation Service (NRCS) Wetlands Reserve Program has restored over 200,000 acres of wetlands in Florida and more than 115,000 acres in Alabama, Georgia, and South Carolina during the past 18 years. Thousands of acres of wetlands are also being protected on private lands to assist in habitat and wildlife protection through restoration in conjunction with establishing conservation easements. Wetland losses are being avoided, minimized, and mitigated through project consultations and the regulatory process.


“The wood stork has shown a fascinating ability to respond to changes in hydrology by broadening its breeding range beyond central Florida, the Everglades, and Big Cypress ecosystems,” said Dave Hankla, Field Supervisor for the Service’s North Florida Ecological Services Office in Jacksonville. “However, this does not reduce the importance restoration of the stork’s historical breeding area has for recovery. Nor does it diminish the significant role South Florida’s ecosystems play for wood storks and other wildlife.”

The announcement, which will publish in the Federal Register in coming days, also constitutes the Service’s 12-month warranted finding on a petition to reclassify the wood stork which was submitted by the Pacific Legal Foundation (PLF) and Biological Research Associates (BRA), on behalf of the Florida Home Builders Association (FHBA).


To ensure its final decision reflects the best available information, the Service is soliciting comments from the public, other concerned governmental agencies, Tribal governments, the scientific community, industry, and any other interested parties. Of particular interest is information and comments concerning:


Anyone wishing to submit information regarding the wood stork throughout its Southeast U.S. breeding range may do so via one of the following methods once the rule has published:

The Service will post all information received on http://www.regulations.gov. This generally means that any personal information provided also will be posted.

Comments and information must be received or postmarked on or before 60 days after the date of publication in the Federal Register.


Submissions merely stating support for or opposition to the proposed action without providing supporting information, although noted, will not be considered in making a determination. Section 4(b)(1)(A) of the ESA directs that determinations as to whether any species is a threatened or endangered species must be made solely on the basis of the best scientific and commercial data available.