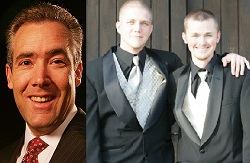 MELBOURNE, Florida -- The National Transportation Safety Board released its probable cause narrative on December 19, 2012 regarding the plane crash that occurred at the Melbourne International Airport on February 29th, 2012.

Several airplanes and a helicopter were in the traffic pattern at the tower-controlled airport performing simultaneous operations to parallel runways (9L and 9R) around the time of the accident.

The accident pilot contacted the tower air traffic controller while south of the airport requesting a full-stop landing; the controller advised the pilot to report when the airplane entered the downwind leg of the traffic pattern.

The controller subsequently cleared the accident airplane to land and expected the pilot complete a "normal" downwind traffic pattern and land behind the airplane already established on final approach for runway 9R; however, the controller did not provide sequencing instructions.

The accident airplane proceeded directly to a tight right-base entry into the traffic pattern for landing on runway 9R, contrary to the controller’s original expectation but permissible based on the clearance to land. The controller radioed the accident pilot to confirm that he had visual contact with the airplane on a 1-mile final approach for runway 9R (the traffic was 300 feet below and 1 mile west).

This was the first indication by the controller to the accident pilot that there was additional landing traffic sequenced to the same runway he had been cleared to land on.

The accident pilot replied that he was on a "real short base" for runway 9R, and the controller responded, "no sir, I needed you to extend to follow the [airplane] out there on a mile final, cut it in tight now, cut it in tight for nine right."

The two airplanes had closed within 1/2 mile of each other, but were still separated by 300 feet altitude. The pilot of the airplane on short final for 9R maintained situational awareness throughout, perceived the conflict before the controller or the accident pilot, and responded calmly and benignly to the conflict.

The accident pilot needed The National Transportation Safety Board determines the probable cause(s) of this accident to be:


The pilot's abrupt maneuver in response to a perceived traffic conflict, which resulted in an accelerated stall and a loss of airplane control at low altitude.

Contributing to the accident was the air traffic controller's incomplete instructions, which resulted in improper sequencing of traffic landing on the same runway.