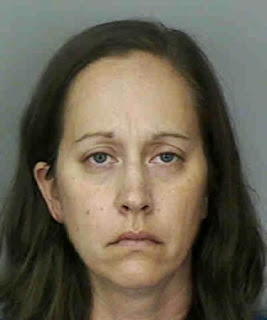 Beth Dickison Richards of Lake Wales, Florida was booked into the Polk County Jail.  Richards faces charges of Attempted First Degree Murder, Poisoning Food with the intent to Kill, Possession of Cannabis and Possession of Drug Paraphernalia in connection to the premeditated attempted murder of her husband, Gregory Lawrence Richards.

At around 6:30 pm, on Thursday, November 29, 2012, deputies responded to the Richards’ shared residence, in reference to a reported poisoning. When they arrived they met with Jessica Jarvis, the suspect’s step-sister and the victim, Gregory.

Jarvis told deputies her step-sister Richards spoke with her earlier in the day and admitted to attempting to poison and kill Gregory by crushing up multiple Trazodone pills and placing them in a tuna fish sandwich for Gregory to eat.

Jarvis advised that after being told this information by Beth, she immediately contacted Gregory’s family members to verify his well-being.

Gregory told deputies he had eaten part of the sandwich earlier in the day and felt nauseous. He had been taken to Lake Wales Medical Center, where he was treated for nausea and dizziness related symptoms, then released.

When detectives confronted Richards about the incident, she allegedly admitted (post Miranda) that she attempted to poison her husband, Gregory Richards, by crushing up multiple Trazodone pills and feeding them to Gregory in a tuna fish sandwich.

During the investigation a pouch containing cannabis was discovered in Beth Richards’ bedroom.  Police say she admitted the item belonged to her.

Richards told detectives she is employed by the US Postal Service as a mail carrier.