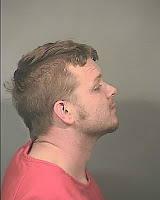 23-year-old Martin A. Hardin III was driving a 2001 Ford Taurus northbound on Holder Road.  FHP says that as the Taurus entered a right-hand curve, Harding failed to maintain control of the vehicle which left the roadway onto the west shoulder.

When Hardin attempted to correct, the Taurus crossed both lanes of Holder Road and departed the roadway onto the east shoulder.  The Taurus collided with Thomas who was walking on a sidewalk.

The Taurus then entered the woods on the west shoulder and came to a stop.  Hardin allegedly fled the scene on foot.  Troopers later located Hardin hiding behind a fence close to the traffic crash scene.

Hardin was placed under arrest for DUI Manslaughter and leaving the scene of a traffic crash. He was then taken to Parrish Medical Center for treatment of minor injuries and subsequently booked into the Brevard County Jail.