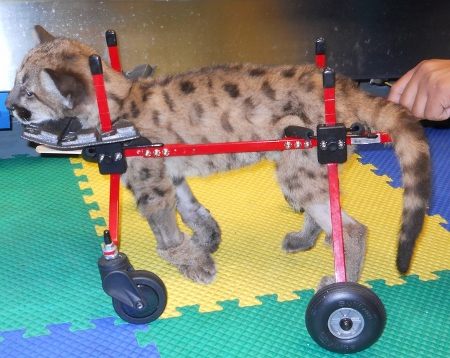 GAINESVILLE, Fla. — When wildlife managers imported eight female Texas pumas in hopes they would mate with native Florida panthers, they knew they were taking a bit of a risk.

But a new University of Florida research study, published today in the Journal of Animal Ecology, suggests their gamble paid off.


Without those pumas, UF researchers Madan Oli and recent UF doctoral graduate Jeff Hostetler found that the probability of the Florida panther population falling below 10 panthers by 2010 was nearly 71 percent.


“We found that the Florida population would’ve declined, on average, by about 5 percent per year,” said Oli, a UF population ecology professor and Institute of Food and Agricultural Sciences faculty member. “And that’s essentially telling us there was a high chance that the population would’ve eventually gone extinct.”

There were an estimated 20 to 25 panthers left in the state when the Texas female cats were brought to Florida in 1995. Officials believe the population has since grown about 4 percent per year, and their estimate now ranges from 100 to 160, said Dave Onorato, a panther expert with the state Fish and Wildlife Conservation Commission’s Florida Panther Project.


Having a scientific study in hand that validates what conservation officials had believed would happen is helpful, Onorato said.


“It shows that the genetic restoration effort was effective at averting the loss of the Florida panther,” he said.


The Florida panther had been listed as an endangered species since 1967, and although it was named the official state animal by 1982, it was in peril by the 1990s. The cats suffered from numerous inbreeding-related problems, including poor sperm quality and other reproductive abnormalities, kinked tails, heart defects and heavy parasite loads.


When the Texas cats were brought to Florida, officials weren’t sure how they would fare or that the breeding effort would work, but with the success of the genetic restoration, Onorato said a similar effort could be initiated again in the future.


For now, however, there is no specific timetable for such an effort. He said the cats continue to face threats from loss of habitat, cars and inbreeding.


Although they sometimes roam far and wide, Florida panthers — the only puma population east of the Mississippi River — are primarily found in the Big Cypress National Preserve and Everglades ecosystem areas that include parts of Collier, Lee, Hendry, Monroe and Miami-Dade counties.


The recent UF study, which examined several decades’ worth of field data and genetic information about the panther, found that the robust survival of the Florida-Texas hybrid kittens played a large role in the panther population being reeled back from the brink of extinction.


“I would say that at least in the short term, the outlook is good for the Florida panther,” said Hostetler, who worked on the project for more than four years as part of his doctoral studies. “But there are still a lot of threats to their survival that could be important in the long run.”
The paper’s other author is Deborah Jansen of Big Cypress National Park.


The research study was funded by the Florida Panther Research and Management Trust Fund (via sales of the Florida “Protect the Panther” license plate), National Park Service, the University of Florida and the U.S. Fish and Wildlife Service.

FWC PHOTO ABOVE: An endangered Florida panther kitten rescued after an apparent vehicle strike in Southwest Florida will likely be unable to return to the wild. Staff from the Florida Fish and Wildlife Conservation Commission (FWC) and U.S. Fish and Wildlife Service found the kitten unresponsive on April 23 along State Road 82 in Collier County, Florida. A volunteer with the Florida Panther National Wildlife Refuge on his way to work spotted the injured kitten that morning and reported the sighting.  Full Story
Labels: Science