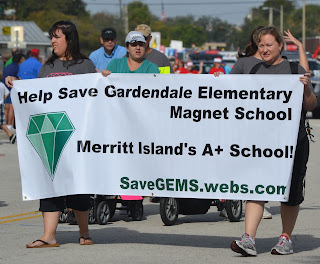 VIERA, Florida - Brevard County parents and teachers are organizing a 'March for Education' to show support for schools, teachers and programs that are part of the Superintendent’s $38 million budget cut proposal released in December.

“The March for Education is for anyone who believes in public schools and wants to show their support of Brevard’s teachers, schools and quality programs,” said Christine McClure, one of the event organizers.

According to the group's website, www.savebps.webs.com, school supporters are to meet at the Viera Regional Park beginning at 4:30 p.m. and then walk over to the School Board Building at 5:30 p.m. The group encourages residents who are concerned about the unprecedented budget cuts currently under consideration to attend the School Board public forum scheduled for 6:30 p.m.

The March for Education is being coordinated by the Save Brevard Public Schools committee, a group of concerned parents who are petitioning the School Board to hold a 2013 referendum in to give the public another chance to vote for a tax to support the public school system.

“We believe the School Board has misinterpreted the narrow rejection of the half-cent sales surtax as a mandate to close schools and slash programs. We hope to show through the March and through our petition that the community is ready to stand up for our schools and to do our part to save the school system from the drastic cuts proposed,” said Michelle Speisman, one of the petition organizers.

One of the parents involved told Brevard Times last week that it is working with the local teachers union to propose a 2013 ballot initiative that will extend a current property tax and add a scaled-back sales tax to offset proposed school budget cuts.  The new tax proposals then became a topic on the Bill Mick LIVE radio show last Friday and is the polling question on the show's website.

The school tax issue begins 26 minutes into the radio show.


In 2011, Brevard County Schools employees held a similar protest march in support of a millage tax increase while anti-tax advocates held a counter-protest.


PHOTO ABOVE:  Supporters to save their respective schools took the opportunity of recent Christmas parades to deliver their message to large crowds.