According to the U.S. Centers for Disease Control, influenza and influenza-like activity remained elevated in the U.S. - but may be decreasing in some areas for the week ending January 5, 2012 (week 1).  The CDC says that influenza activity is increasing nationwide and is most elevated in the eastern half of the country.  Nationwide, influenza A H3N2 is the most commonly detected influenza subtype


Each week, the vital statistics offices of 122 cities across the United States report the total number of death certificates processed and the number of those for which pneumonia or influenza was listed as the underlying or contributing cause of death by age group.

7.3% of all deaths reported through the 122 Cities Mortality Reporting System were due to pneumonia and influenza in week 1.  This percentage was just .1% above of what the CDC considers the epidemic threshold of 7.2% for that time of year. 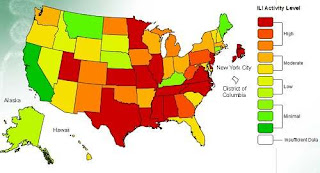 There was one flu outbreak in Florida for week one which occurred in Orange County, Florida where 19 staff in a Central Florida nursing home reported ILI.  One specimen tested rapid antigen* positive for influenza of unknown type. *Rapid antigen tests, commercially available, are considered less scientifically reliable than other tests.


Because of the statewide reports of increasing influenza and influenza-like illness activity, the Florida Department of Health is reporting widespread influenza activity to the CDC for week 1.  The classification of a widespread activity level refers to the geographic spread of influenza - not its severity or intensity. 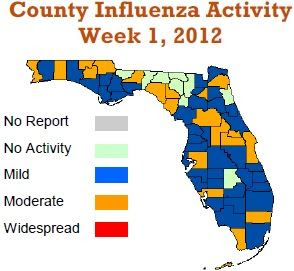