Child Deaths From Falling TVs On The Rise

The U.S. Consumer Product Safety Commission (CPSC) is urging parents of young children to anchor and stabilize their televisions, furniture, and appliances to prevent tip-over related incidents. In a quest to reach a toy, TV or game remote, or other desired item, young children are using dressers and tables as climbing devices and the results are tragic.

A new CPSC data report shows that 349 consumers (84 percent of them were children younger than age 9) were killed between 2000 and 2011, when TVs, furniture or appliances toppled over onto them.  2011 had the highest one-year number of fatalities reported.   The 41 recorded fatalities is an increase from 31 in 2010 and 27 in 2009. This total also may increase in future years as additional fatalities are reported.

"We know that low-cost anchoring devices are effective in preventing tip-over incidents," said CPSC Chairman Inez Tenenbaum. "I urge parents to anchor their TVs, furniture and appliances and protect their children. It takes just a few minutes to do and it can save lives."

CPSC estimates that more than 43,000 consumers are injured each year in tip-over incidents. More than 25,000 (59 percent) of those injuries are to children under the age of 18. Falling furniture accounts for more than half (52 percent) of the injury reports. Falling televisions have proven to be more deadly, as they are associated with more than half (62 percent) of reported fatalities.

Small children are no match for a falling dresser, wall unit or 50- to 100-pound television. Children involved in these tip-over incidents often sustain severe head and other injuries to the body as a result of being crushed by the product or trapped under its weight. In 57 percent of the reported fatalities and 39 percent of injuries, the victim was struck in the head by the falling item.

Some reports indicate that as families purchase or transition to flat screen televisions, their older and often heavier televisions are moved into bedrooms and other rooms in the house, without the proper stand or anchoring device accompanying them. Many of the reported fatalities occurred in bedrooms, living rooms and family rooms with 40 percent occurring in bedrooms and 19 percent occurring in living rooms or family rooms.

Unanchored televisions placed on dressers, bureaus and tables not intended to be used as a TV stand have been associated with many tip-over incidents involving both the TV and the furniture. Flat screen and older, bulkier cathode ray tube (CRT) televisions should be placed on stands appropriate for the size and weight of the product. Once in place, an anti-tip or stabilizing device should be installed to help prevent tip overs. 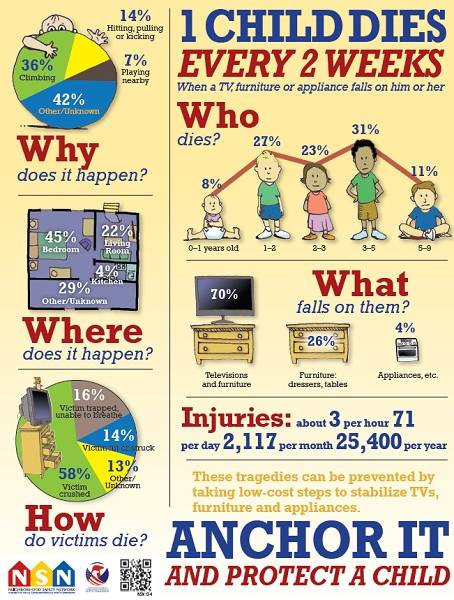