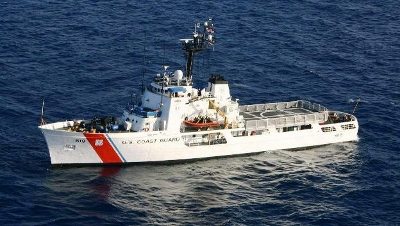 PORT CANAVERAL, Fla. — The crew of the 210-foot Coast Guard Cutter Confidence returned to homeport in Port Canaveral Monday morning, concluding a 56-day deployment in the southern Caribbean during which the crew interdicted an estimated $25 million worth of drugs.

While underway, the crew of the Confidence in conjunction with the Coast Guard Cutter Forward, homeported in Portsmouth, Va., and a Helicopter Interdiction Tactical Squadron aircraft deployed out of Jacksonville, Fla., successfully disrupted two go-fast vessels in the southern Caribbean.  Both vessels were found transiting northbound at a high rate of speed, and HITRON exercised Airborne Use of Force to disable their engines.  The combined effort from all three units resulted in the apprehension of eight suspected smugglers and 660 kilograms of cocaine worth an estimated street value of more than $14 million.

One month later, the crews of the Confidence, Forward and HITRON executed another drug interdiction.  The three units coordinated to stop a go-fast vessel transiting from Columbia to Honduras.  The Confidence crew positioned the cutter to launch its embarked HITRON who again used Airborne Use of Force to disable the go fast’s engines.  The Forward crew then boarded the vessel and apprehended four suspected drug smugglers and 425 kilograms of cocaine with an estimated street value of more than $11 million.

"The ability of these two cutter crews and the helicopter squadron to seamlessly integrate and execute this interdiction in the dead of night is a testament to their hard work, professionalism and relentless training regimen," said Confidence's Commanding Officer, Cmdr. Jim Passarelli.

The coordinated effort between all three units under the direction of Joint Interagency Task Force South resulted in the total disruption of 1,085 kilograms of cocaine worth an estimated street value of $25 million. The interdictions were carried out as part of Operation Martillo, which is one component in the United States government's whole-of-government approach to countering the use of the Central American littorals as transshipment routes for illicit drugs, weapons, and cash. Operation Martillo is an international operation focused on sharing information and bringing together air, land, and maritime assets from the U.S. Department of Defense, the Department of Homeland Security, and Western Hemisphere and European partner nation agencies to counter illicit trafficking. Overall coordination of the counter-drug mission in the Caribbean is done by the Joint Interagency Task Force South, headquartered in Key West, Fla.


Over 5,000 Pounds of Cocaine Offloaded In Port Canaveral