TALLAHASSEE, Florida -- The Florida Lottery, with one of Florida's most recognizable brands, today unveiled a new logo and brand identity, marking the agency's 25th year anniversary.  Florida Lottery Secretary Cynthia O'Connell revealed the new logo on a sign at the headquarters building in Tallahassee.

"We are so proud of our agency's accomplishments over the past 25 years, but we could not be more excited for what's to come," said O'Connell. "As the Lottery continues to evolve, we are committed to attracting new players, maintaining existing players, rising above the competition, doing business with integrity and upholding our primary mission to fund education.  These commitments fortify this agency as one of the most successful lotteries in the nation."

As the Florida Lottery continues with enthusiasm encourage people to play its games, the agency says it will also continue to make it a priority to use tickets and signage to encourage players to "Play Responsibly."

"The Florida Lottery is a true success story for the state of Florida," said Governor Rick Scott. "For 25 years, this agency has consistently provided benefits to our state's economy and education system."

According to the Florida Lottery, 61 cents on each dollar spent playing lottery games goes to prizes, 30 cents goes to education, 5 cents to retailers, 2 cents to vendors, and less than 2 cents goes to operating expenses (Click infograph to enlarge). 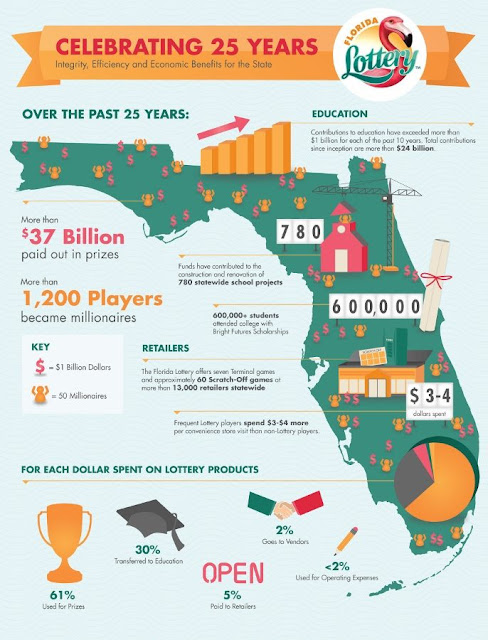