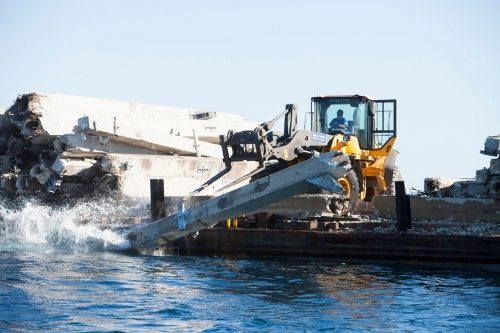 FORT PIERCE, Florida -- Off the coast of St. Lucie County, divers and anglers can enjoy two new artificial reefs that were created through a donation of 130 concrete poles provided by Florida Power & Light Company (FPL).  These new reefs, located east of Fort Pierce, Florida, are in addition to an artificial reef created in 2005 using FPL-donated material.

In October 2012, FPL removed and replaced 130 concrete poles in Port St. Lucie with about 60 poles that are more storm-resilient.  This project and a new substation are part of FPL's larger plans to enhance service reliability and reduce service interruptions in St. Lucie County.

The donated poles, weighing a total of about 2,000 tons or the equivalent of 1,250 mid-sized cars, were transported to Harbour Pointe Park in Fort Pierce before they were submerged off the coast during four deployments in December 2012 and January 2013 to create the reefs. The coordinates for the two reefs, which are in about 60 feet of water and have already attracted fish, are:

FPL's donation is the most recent example of what the company says has been a long-standing corporate value of environmental stewardship. For example, FPL's decades-old program that monitors and protects the American crocodile at Turkey Point power plant has helped remove it from the federal endangered species list. In addition, approximately three-quarters of the St. Lucie power plant property consists of mangrove swamps, marsh and beaches, allowing the company to support a variety of environmental activities, including a sea turtle monitoring and protection program.

"FPL has been a great partner working with our program to increase the artificial reefs off of our coast," said James Oppenborn, St. Lucie County marine resource coordinator. "The initial artificial reef created by FPL has become very popular for fishing and diving, featuring more than 30 species of fish and various sea life growing on the concrete poles. These reefs have also generated economic opportunities for area businesses, providing services to visitors enjoying the reefs."

Since 2005, St. Lucie County's artificial reef program has spared 16,000 tons of concrete from landfills, while creating 24 underwater habitats for marine life, anglers and divers to enjoy. St. Lucie County has one of the most active artificial reef programs in the state. Reports from consultants, anglers and divers indicate that the reefs are providing habitat for 111 species of fish.