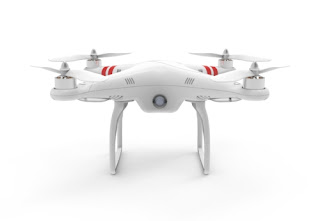 Have you ever wanted to fly your own drone with a camera to take aerial photos and videos?  Well, here's your opportunity.  DJI, one of the world's leading developers and manufacturers in UAV systems, today announced the launch of the PHANTOM™, the company's first easy-to-fly, consumer quadcopter.   The company says that before the PHANTOM, building and flying multi-rotor aircraft was a complex task only performed by professionals and extreme hobbyists.

For the first time ever, DJI brings professional-level multi-rotor flight control technology to the average person by incorporating DJI's intelligent, GPS-based autopilot system into the PHANTOM. This provides for simple, ultra-stable and reliable flight characteristics right out of the box.  Priced at $679, the PHANTOM is also half the price of competing units that require complex building and soldering to assemble.

The PHANTOM comes with a remote control unit containing pre-programmed autopilot parameters and a GoPro camera mount, making aerial cinematography easy for almost anyone.  With the built-in DJI Naza-M autopilot system with GPS module, the PHANTOM has both GPS Attitude and Attitude Control Mode. Pilots can switch between the two modes to achieve particular flight experiences.  Also incorporated are safety parameters, such as a failsafe feature that will bring the PHANTOM back to its take-off point and land itself if it loses signal from the remote control unit for any reason.

"DJI has always been at the forefront of both UAV flight control systems and innovative airframe technology," stated Colin Guinn , CEO of DJI North America.  "The PHANTOM is more than an evolution of our existing technology, it is a quantum leap forward in bringing professional-level, multi-rotor aircrafts to the average consumer."