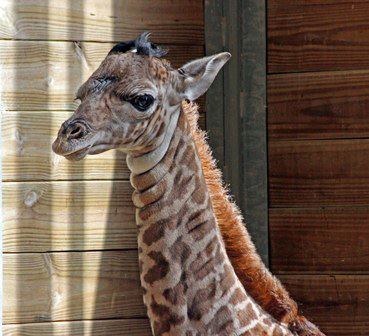 MELBOURNE, Florida -- The Brevard Zoo welcomed another Masai giraffe calf on last Tuesday, February 19, 2013.  The female calf born to dad, Raffiki, and mom, Milenna, weighed in at 145 pounds.  Zoo officials say that the mother and baby are bonding well and Milenna is proving to be a protective mother.

“This is the first time that our two adult breeding females gave birth in the same month,” said Michelle Smurl, director of the Animal and Conservation Programs at Brevard Zoo.  “Staff has introduced the two new calves and the male is more assertive and curious.”

Milenna and calf will remain behind the scenes with Johari and her baby, born on Feb. 6, until it is determined by animal staff that the foursome is ready to mingle with the rest of the herd.  According to Smurl, this is the second birth for Milenna. Her first born, Rafeano, was born in April of 2011. He remains on exhibit at Brevard Zoo.

The average gestation period for giraffe is approximately 15 months or 453 to 464 days.  Giraffe have no formal breeding seasons and calving is often synchronized to provide safety in numbers against predators.  Giraffe give birth standing up, requiring the newborn to fall about six feet to the ground.  A newborn calf can stand up and run within an hour of being born.  The average height at birth is around six feet and females tend to be slightly smaller than the males.  Newborn calves grow very quickly and can nearly double their height in the first year.  A newborn giraffe will suckle its mother’s milk as soon as it can stand up.  Calves are reliant on their mother’s milk for nine to 12 months..

Generally, there are three types of giraffe species in zoological facilities.  They are commonly referred to as Reticulated, Rothschild and Masai.  The Masai species has historically represented a smaller population in zoos..

The Masai giraffe has jagged spots on its body and the dominant male’s spots tend to be darker in color than those of other members of the herd.  Adult Masai giraffe males can reach a height of more than 19 feet; females tend to be a bit shorter. An adult giraffe heart can weigh up to 25 pounds.  Both male (bulls) and female (cows) giraffe can live to about 25 years in the wild and longer in captivity..

Poaching, human population growth and habitat loss continue to have an impact on the giraffe’s distribution across the African continent.  It has been recorded that giraffe numbers have declined by one-third in the last decade alone. Through an in-house conservation grant program Brevard Zoo contributes funds to support giraffe field conservation projects.