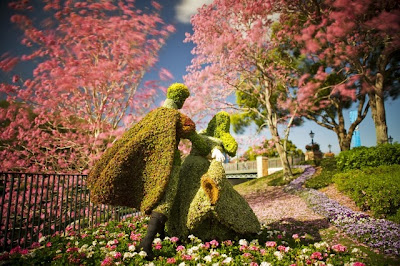 Every Friday through Sunday, HGTV design celebrities will host Festival Center seminars.  During opening weekend, March 8-10, Chris Lambton of “Going Yard” will appear; other designers scheduled to take the stage include David Bromstad of “Color Splash” and Meg Caswell of “Meg’s Great Rooms.”

In all, more than 100 topiaries, 240 floating mini-gardens, dozens of flower towers and sweeping beds of multi-colored blooms will add floral splendor to the park landscape. Speaking of “flower power,” the Flower Power concert series kicks off March 8-10 with Micky Dolenz (“I’m a Believer”)  and continues each weekend with pop favorites including:

While Walt Disney World guests celebrate spring during their festival visit, they also can explore the reimagined, design-centric Test Track Presented by Chevrolet, the hang-gliding sensation of Soarin’ and other high-tech Future World marvels.  In World Showcase, where the spotlight will shine on topiaries of Disney princesses, storybook characters and even pandas and trolls, guests will discover the attractions, shops and restaurants that represent cultures and cuisine of 11 countries.

For more information about the 20th Epcot International Flower & Garden Festival, call 407/W-DISNEY (934-7639) or visit www.EpcotinSpring.com.  The festival, including all gardening programs and exhibits, is included in regular Epcot admission.