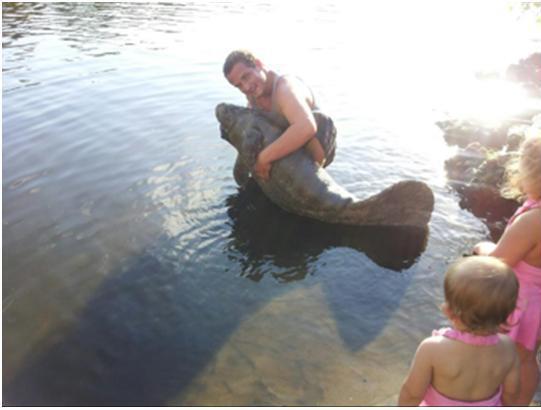 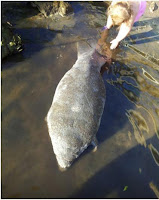 ST. LUCIE COUNTY, Florida -- Facebook photos of a man hugging a Florida manatee have resulted in the man's arrest.

FWC investigators received a tip from a citizen regarding pictures that Waterman had posted on Facebook.  The pictures show Waterman and two young children petting a manatee calf.  They also show Waterman lifting the calf partially out of the water.  One image even shows a child sitting on top of the manatee.

The state attorney agreed with the charges filed by FWC investigators, and a warrant was issued for Waterman’s arrest.  He was booked into the St. Lucie County Jail on Sunday.

The Florida Manatee Sanctuary Act stipulates that it is illegal to injure, harm, harass, capture or attempt to capture a Florida manatee.

An interaction that may seem harmless and innocent may ultimately have serious consequences for manatees and other wildlife.

“This was a young manatee which was likely still dependent on its mother for food and protection,” said FWC manatee biologist Dr. Thomas Reinert. “Separating the two could have severe consequences for the calf.”

“The calf also appeared to be experiencing manatee cold-stress syndrome, a condition that can lead to death in extreme cases,” said Reinert. “Taking the calf out of the water may have worsened its situation.”

“This investigation is an example of our commitment to carry out our mission to protect Florida’s natural resources and people through proactive and responsive law enforcement services,” said FWC Lt. Chris Harris. “It also demonstrates our efforts to work with federal partners, the general public and the State Attorney’s office to achieve this goal.”

The FWC asks anyone who witnesses manatee harassment or finds a dead or distressed manatee to please call the FWC Wildlife Alert Hotline at 888-404-FWCC (3922).


Florida Manatee May Be Taken Off Endangered Species List