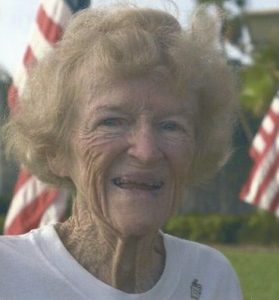 Kathleen Scott Robertson was born in Norwood, MA on 9 May 1921 to Helen and Charles Robertson, both immigrants from Scotland. Helen and Charles had 7 children, 4 boys and 3 girls, with Kathleen being the 5th born. Each child was expected to help support the family so after graduating from Norwood High School, Kathleen worked as a nanny with much of her salary going back to her parents to help pay the family bills during very difficult times.

Shortly after the bombing of Pearl Harbor and responding to the call to serve, she enlisted in the US Navy and was designated as one of the first 7 WAVES to enter Naval Service. Her specialty training was conducted at Lakehurst, NJ and was designated a parachute rigger in 1942 with her next duty station being Corpus Christi, TX. While at Corpus, she became affectionately known as “Scotty” due to her Scottish heritage and middle name. At that time female riggers were not allowed to jump like their male counterparts, but through sheer determination and perseverance her request was approved and in Aug 1944, Scotty conducted a 2000’ free fall parachute jump from a R4D becoming the first WAVE and Rigger in the USN to do so. At the time of her jump she was the only female to hold the rating PR1C.

In Oct 1944, she married CPO Leo Culp who was a Jump Master at NAS Corpus Christi and later that year received an Honorable Discharge from the Navy in Dec 1944 after completion of her initial enlistment. In 1946, Leo received orders to Banana River NAS and over the next two years realized that this was where they wanted to live and raise a family. When the Naval Air Station was deactivated and turned over to the USAF, Leo applied for an interservice transfer and then orders to newly designated Patrick AFB. Through the 50’s they lived in Eau Gallie and Scotty worked full time as a freelance journalist and photographer for the Orlando Sentinel, but still found the time to be an active member of the American Legion, Eastern Star and helped Jimmy Moore with numerous funding raising events , collecting food for the poor and establish the Eau Gallie Little League. Then in 1958 two life changing events occurred for Scotty; she met Percy Hedgecock and the Culp’s became proud parents of twin sons, Ronnie and Rickie. Percy was keenly aware of Scotty’s reputation as a community leader and volunteer and wanted the Culp’s to move. He explained his vision of the city on the beach that he and his brothers were building and how it will be a great place to raise a family. So in late 1959, the Culp’s moved to Norwood Ave in the City of Satellite Beach. Over the next 53 years, Scotty would establish her legacy as an unwavering, dedicated volunteer always happy to serve the City she so loved.

Scotty was involved for decades of loyal service to the City of Satellite Beach and Satellite High School and a complete listing of her accomplishments could fill a library. A small example of her noteworthy endeavors and initiatives is as follows: 1st Crossing Guard for Surfside Elementary, Coordinator/photographer for annual Founders Day Parade, Program Director Pelican Beach Park, City Beautification Committee, Recycle Program for SHS, Scotty Duty at SHS, Director of 21 Day Flag Salute, writer/ photographer for the Beachcaster, just to name a few. In 1996, Scotty received another incredible honor by being selected to carry the Olympic Torch through the City of Satellite Beach; she jogged along A1A, torch in hand, with a big smile as she waved to the hundreds lining the street cheering her on. Through the years, Scotty received numerous awards and accolades for her selfless service and dedication to the City and Satellite High School but none more gracious than the renaming of the Civic Center, City Hall and Hedgecock Brothers Field to the Scotty Culp Municipal Complex in 2011. Scotty is the shining example of what a difference one person can make.

Scotty not only set the example for others to follow, she was the one that stepped in to help when others would not and did so with a smile. Tireless and hardworking in all that she did, she was driven by doing the right thing and making Satellite Beach a better place for all. Never one to mix words, she lived by the Golden rule and believed that a person’s character is measured by their actions, not their words. A devoted, loving and caring Mother, Scotty never missed a game, race, match or event that her sons were involved. While continuing to serve her City, her greatest joy over the last 19 yrs was spending time with and talking about her two granddaughters, Rachel and Emily. An undaunted volunteer, role model, mentor, and kind lady; Scotty was loved and admired by so many, as she touched the lives of young and old alike.

Kathleen “Scotty” Culp, “The First Lady of Satellite Beach” passed away at her home on 8 March 2013 at the age of 91. Beach Funeral Home of Indian Harbour Beach will host a visitation from 6-8pm on 14 March, family and friends are welcome. Scotty will be laid to rest next to her husband and parents at Florida Memorial Gardens on 15 March in a private family service.