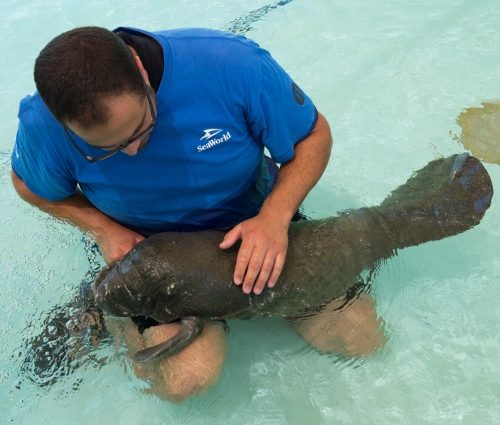 ORLANDO, Florida – An orphaned manatee calf was rescued yesterday afternoon by the Florida Fish & Wildlife Conservation Commission, and then transported to SeaWorld Orlando late yesterday for rehabilitation and long-term care.  The young calf was spotted swimming alone by a private citizen prior to its rescue from Sykes Creek off Merritt Island, Florida.

Measuring approximately 36 inches long and weighing approximately 35 pounds, the male manatee was rescued due to its young age -– the calf is only estimated to be between one and two weeks old, and its mother was nowhere to be found.

Upon arrival at SeaWorld Orlando, animal care experts took blood samples, gave the manatee antibiotics and observed his condition overnight. The calf will receive regular tube feedings, and will continue to be monitored closely during the next few days.


So far in 2013, SeaWorld has rescued eight manatees and returned one back to their natural habitat. In collaboration with the government and other members of accredited stranding networks, SeaWorld Parks & Entertainment operates one of the world’s most respected programs to rescue ill and injured marine animals, with the goal to rehabilitate and return them to the ocean.

SeaWorld animal experts have helped more than 22,000 animals in need - ill, injured, orphaned and abandoned - for more than 40 years.